The EFL had their Junior Boys Presentation Awards event at Ringwood’s Karralyka Centre, awarding its Junior division’s Best & Fairest Awards, as well as presenting the premiership flags to each age group and grade.  This of course included our U12 Purple and U14 Purple teams. 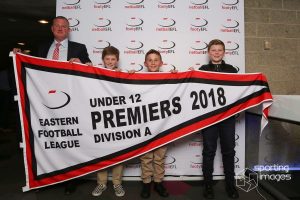 But the highlight of the night was the announcement that our club had been awarded the “Gordon Parker Award” for the “Best Conducted Junior Club” for season 2018.  The award is based on the number of points allocated by umpires to each club in their match reports based on the attitude of players, coaches and spectators.  The EFL Junior Committee also consider other matters of conduct when deciding on which club will receive the award each year.  When presenting the award, EFL Media Manager Daniel Cencic, highlighted a number of other reasons why the VJFC won this season including: effectively co-ordinating 24 teams (the most in the EFL), our support for the recent growth in girls football, working with the council to open our second Livingstone oval, as well as managing the introduction of the Senior Women’s team this season.  It was a privilege to receive the award on behalf of our club.  It provided great recognition for our committee members and the many other volunteers around the club who put in a lot of time and effort to make the VJFC such a great place for our sons and daughters to play footy at. 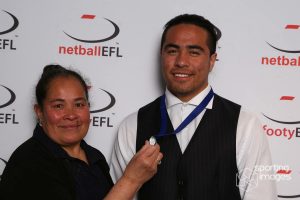 For the second year in a row, we also saw one of our players win the U17 Premier Best & Fairest award.  This season it was Sal Feagaimalii who won the B&F, which was an amazing achievement given that he missed six games throughout the season.  Congratulations and well done to Sal.