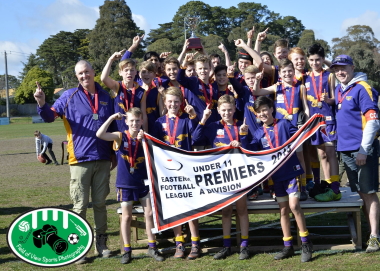 After going through the home and away season undefeated and winning the Semi and Preliminary Finals comfortably, the boys headed into their first Grand Final. Nervous, yet quietly confident, if they played the way they had all year, they could get the result they were after. The Grand Final would be against Mitcham, who finished 3rd on the ladder and who we had defeated twice during the season.

It was a fresh but sunny morning. A little dew on the grass, smell of sausages and onion in the air, a big crowd was building. Morton Park was looking a little worse for wear after a long season. That didn’t matter to us as we had our final chat before running through the banners and standing for the national anthem. The boys were ready to give their best for each other and get the result they had worked hard for.

1st Quarter
Both teams showed strong attack at the ball from the start which made it a very congested game early, which didn’t allow us to settle in and get our usual running game going. This suited Mitcham and they got on the score board early. We had our chances that we didn’t take, resulting in our first scoreless quarter for the season. Not the start we were hoping for.
Vermont 0 0 0
Mitcham 1 1 7

2nd Quarter
Our effort was there, we just tried to remind ourselves we needed to continue to share the ball and not to be afraid to take them on with run and carry. While the game continued to be played in close and tight, there were signs we were starting to get the game going our way. We won the quarter and had chances to score more than they did, but went into halftime 1 point down.
Vermont 1 1 7
Mitcham 1 2 8

3rd Quarter
This was another tight quarter with both teams giving it all. I felt we started to gain control of the mid-field half way through the quarter and started to play the game in our half. Again we continued to give ourselves chances but were unable to take them, but a goal in the last minute of the quarter was just reward for the boys’ efforts.
Vermont 2 3 15
Mitcham 1 2 8

4th Quarter
I could feel the tension leave the boys after the goal just before the ¾ time siren. Having up to 16 players rotate through the mid-field every game throughout the season, became a strength for us and this game was to be no different. We encouraged each other to share, continue to run and carry the ball for one last quarter. With our mid-field starting to control the game and plenty of run coming from half back when needed, we continued to give ourselves opportunities to score and we started to take them. The boys looked the fresher team and were playing the football we had seen all season. SIREN!  WOOHOO!  What a fantastic win!