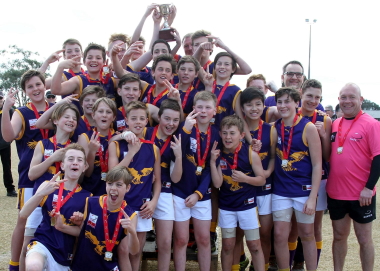 As reigning Premiers there is always a feeling of heightened expectations from players, parents, the club and from the opposition. As we know opposition teams always regard the reigning Premiers as the measuring stick of the competition and grow that extra little bit in their efforts to knock off the Premiers. With this expectation and the team’s ambition and desire to again play off in the final game of the year our preseason training started a little earlier than usual. This was to ensure we were ready to go come round 1 and with a number of new players to the team, it was important to bond and gel quickly as one team.

Throughout the season the boys played some very good football, even through the challenge of injuries and absence and in fact we didn’t play one game for the season with our complete list, regularly playing with between 17-21 players. Regardless, we finished the home and away season third on the ladder 11 wins and 3 losses.

As the finals approached, we were in great shape sitting atop of the ladder with only one loss, however one month out from the finals we dropped two games in a row which saw us drop to third, and for the first time in a long time the group was faced with a real challenge. This was a pivotal moment in the season and one worth mentioning, as the options facing the group was to step up to the challenge or to play out a pretty good season. I am so proud of how the entire playing group chose to step up and take on the challenge of working hard as one team. The boys dug deep, rallied as one and showed over the next four weeks the determination and desperation to get back on track. This was particularly evident at training where the intensity and tempo increased significantly.

Whilst the first week of the finals wasn’t how we wanted to begin our campaign, losing by six goals, this loss seemed to sting the boys post game. However, by the time training rolled around they seemed to be more determined than ever, with that session being the best for the year. I was confident if we played anything like we trained we would overcome North Ringwood - a team that had beaten us by nine goals only three weeks earlier.  The boys played one of the best team orientated games I have seen the boys play and won by 48 points to book a spot in the grand final.

It must be said (well by me anyway!) that Grand final day is the best day on the calendar for a footballer and supporters, as it is exciting and nerve racking all at the same time. As grand final day is the day you get to play the best and have the opportunity to be the best. In the rooms pre-game there was nervousness, anticipation and a real sense of determination, whilst the boys initial greeting was with a nervous smile it was quickly followed up with words of excitement and determination.  Whilst there was a simple message pregame on how we wanted to play the one overarching message that was to be our number one focus was to play hard, play as a team and never give up. And with that we hit the ground and smashed through the banner ready to defend our premiership title.

The first quarter was a fast and physical affair with the boys playing their hardest, strongest and most disciplined quarter for the year. Our defenders were under extreme pressure but stuck tight and repelled the constant attack from Mitcham. Our forwards played in front and our midfielders refused to stop running. All across the ground the boys stuck to the task ran hard in numbers, tackled strong and moved the ball with speed. The first quarter was as expected, very close and tight with Mitcham scoring two straight goals to go into the break with a 4-point lead. The message at quarter time was simple - keep working hard for each other, keep up the intensity and let’s move the ball even faster and we will wear them down.
Vermont Purple 1.2-8        Mitcham 2.0- 12

In the second quarter this is exactly what the boys did, the intensity at the ball and the opposition was exceptional, there were countless times we outnumbered our opposition at the contest and countless times we laid strong tackles to dispossess our opposition. The boys moved the ball with speed and precision by hand resulting in our opposition looking in all directions trying to stop our run, carry and movement of the ball... but to no avail.  The second quarter produced the best team football for the year.  As I was walking across the ground at half time, I was simply in awe of the level of football the entire playing group had just played and thinking to myself what was my halftime message going to be – I had planned all week the various scenarios and what I might say. However, entering the rooms at half time I simply congratulated the boys on a magnificent team effort so far and that’s the type of performance we had been striving for all year. The challenge I set however was that this was the level we needed to uphold for the remaining half and in particular the third quarter or the “premiership quarter”; the quarter where Grand Finals are won and lost.
Vermont Purple 5.2-32        Mitcham 2.0- 12

The third quarter began with the same ferocious attack on the ball, with numbers at the contest and desperation shown by all to run hard to support, punch from behind and scramble at all costs to restrict the opposition from gaining any ascendency. Our opposition lifted their game; however, this only spurred the boys on more and they too lifted and controlled much of the quarter in our forward half. Whilst this was not reflected on the scoreboard kicking 1.5 it was still enough to keep the opposition at bay, and we held them scoreless for the quarter. The three-quarter time huddle was full of excitement and most of all determination in that this was not yet over and the look on the boys faces showed just that. They were itching to get back out and continue on their way – but that was a great premiership quarter!
Vermont Purple 6.7-43        Mitcham 3.0- 18

The last quarter saw our opposition jump out of the blocks kicking a couple of goals sparking some life into the game. This spark was quickly extinguished by our boys again lifting their work rate and returned the favor and kick three magnificent goals for the quarter. With these goals coming from selfless displays of hard running, shepherding, numbers in support and an open forward ready to finish off the good work by the players up the ground. The last quarter was a great example where the entire team never gave up and the boys pushed just as hard in the last minute as they did in the first minute of the game. This was when as coach I was fortunate enough with three or so minutes to go to just “watch” the game as a parent spectating, clapping and cheering the exceptional team football the boys were putting on display.