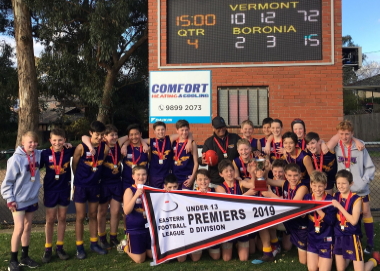 This season was an amazing transformation of the boys attitude towards commitment,team work,the willingness to put self preservation aside to advance the growth and strength of the team moving forward.

We concentrated on four major focus points from day 1 of my opportunity to coach and develop them:
1) Communication and voice
2) Taking possession of the football at every contest
3) TEAM is our focus improvement based on individuals working together toward a common goal ultimately a Premiership in 2019
4) Behaving within guidelines of club and team rules and behaviours on game day and at training.

Getting these core values entrenched in 12-13 year old boys has it's challenges but ultimately we had nearly full buy in after about a month of training and 4 wins on the trot.

The boys behaviour at training and on game day improved on a weekly basis and I feel we developed wonderful team spirit and that as a coach and players a very strong and united bond was forming leading us to further wins and successful outcomes for individual and team improvement and each boy owning their role in the team and regularly improving week by week and game by game.

Ultimately we finished Minor Premiers and created an expectation of success from outside and inside the playing and coaching group and the wonderful supportive parents of the Vermont U13 Gold players.

Due to interesting Final fixtures and 6 out of 8 participants in the competition making finals, we started our campaign in the finals in terrible wet and windy conditions with a fabulous effort a great defensive effort and a comfortable victory without conceding a score against us.

Preliminary Final was our next challenge and due to the draw and Boronia defeating Coldstream we took on Coldstream who were the benchmark of the competition and the only team to beat us for the year.  Our boys attitude, commitment and desire for success drove them to a marvelous performance seeing us qualify for THE BIG DANCE in a professional determined manner which is a credit to their development in all areas skills, desire, attitude and willingness to adhere and trust team football and superior commitment would get the to the Grand Final.

Grand Final day came after a good night on the track Wednesday and my confidence internally was high but the boys had no idea that I thought they would be able to get the job done on the day. We approached the game as we had our two previous finals with our focus on hard determined team football. The boys were outstanding all day and we ultimately came away with a near 10 goal win over Boronia.  It was the ultimate reward for our boys commitment and willingness to develop listen and grow as individual players but ultimately as a team.