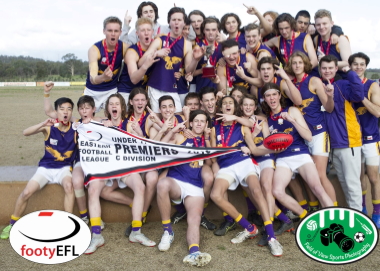 After a couple of strong performances in our first two finals, we went into the GF ready to go.  The intensity of the game was red hot early on with all the guys getting involved. This was led by the Bull Preston and AB Express, both putting their heads over the ball and running in a straight line. With our backline holding tight and our mids on top we were able keep Waverley goalless for the quarter. Nicky Bel and "Diso" both got us on the scoreboard with "C- Rob" and "Tiger" Taylor looking dangerous up forward.

The second quarter saw all the boys working overtime as we were kicking into a strong breeze. Big Al Greaves continued to give us first use out of the middle, with "Spence", "Perko", Issac and "Hynesy" getting plenty of the ball. We kicked another couple for the quarter through "C-Rob" and kept Waverley to one major.

Waverley come out firing in the third quarter hitting the scoreboard a couple of times early on. The boys kept pushing and battling away and we managed to hit the scoreboard with "El Sneeko" Seymour, "Diso" and "Spence" kicking majors. Everyone was contributing and playing their role for the team.

The last quarter started with Waverley kicking a goal and the pressure building. All players were throwing themselves at the ball, with our backs under the pump. "Culls", "Skewy" and "Papa" were holding firm across half back and "Atty" was getting leather poisoning across half forward. Our mids got back on top giving our forwards silver service. "Sneeko" and Nickey Bel kicked majors, with "Kirky" almost finishing off the game in style, but hit the post!

The effort from all the boys was huge, with contributions from all players across the four quarters. A tremendous group of boys who all season committed to a team first attitude.