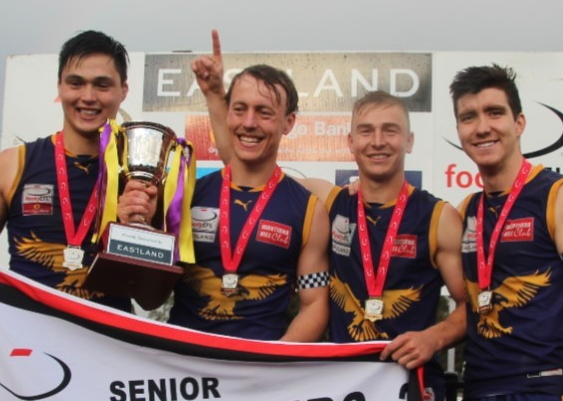 For the 4th year in a row we would play in the Premier Division Grand Final. This year we would take on local rivals Blackburn.

We had beaten Blackburn on both occasions during the 2019 season with the margins being relatively slender.

After our win against Balwyn we were able to give Tom Schneider an extra couple of weeks to get over his Hamstring strain suffered in Round 18 & would welcome back Rob McComb with the Bulldogs being knocked out of VFL Finals.

One of the hardest things in footy is leaving players out, even more so in the Grand Final. We had to make 2 changes & after considering the likely Blackburn line up and match ups, the unfortunate duo were Connor McCafferty and Xavier Barry Murphy.

Both would still get the opportunity to play with our Reserves team shooting for 3 in a row.

I couldn’t fault our preparation leading in to the Grand Final. We did a heavy training load through the middle of the season, Had 5 sessions on larger ovals in the final month of the year & the last 2 week block of the season was mapped out meticulously.

Thank you again to Paul Turk. A great man who has been massive support from a physical conditioning perspective.

Our focuses around the match were:

As is the norm at Bayswater in Grand Finals we lost the Toss! Ainger kicked our opening major which was followed by Blackburn kicking 3 goals in 12 minutes to lead by 12 points at the 24 min mark. We went coast to coast via some excellent play by Rob McComb and Tom Maas with Kirby McConnon kicking a classy goal of his left foot to bring the margin back to 6 points at ¼ time. We stuck to our plan – executed relatively well and could then reassess at the break.

We dominated the 2nd quarter, our pressure and work around the ball was fantastic. We kicked 6 goals 7 in Q2 and dominated field position, with that being said our shape / defensive actions behind the ball were really good in not allowing Blackburn to get us over the back. Blackburn kicked 1 goal via Lachy Howe – it was a great duel between him and Robbie Ross.

A highlight of quarter 2 was Ainger’s goal just before the half time siren – 55m out (He told me it was 65 last night..) hemmed in on the boundary like and drilled it post high! It was a moment in the game where I feel we really did gain so much momentum from.

We took a 31 point lead in to the break. Half time was incredibly focused with the divisional groups.

We again set out a similar plan in Q3 and you could see our mindset was really strong. We had some opportunities to score early in to the wind and missed. Blackburn kicked a couple of goals 8-10 minutes in to the quarter. We immediately set up more defensively and were able to force some repeat stoppages.

Greenwood who had a profound impact on the game kicked a great snap to give us some breathing space. Blackburn moved the ball really positively after taking an intercept mark, Andrew Ainger who was playing on the Wing got back and outmarked Jake Hammond – the ball then immediately went out to the open side of the ground and we connected with Jake Best – his shot faded across goals, however, Chandler Medallist and Champion Forward Brett Eddy marked strongly and snapped a beauty.

To lose the quarter by only 2 points was massive.

¾ time with the aid of the wind in the last we would be hard to beat however, our mindset around no entitlement was really strong. Blackburn missed a couple of shots early in Q4 that would have made things a bit tighter, however, we hung in the there and continued to apply great pressure and being secure with the footy.

Ainger took another Hangar and kicked his 3rd to put the margin out again to 34 points.

Our backline of Lehmann, Willocks, Fisher, Parker, Maas, Carey and Hyams were not beaten on the day and nullified a dynamic Blackburn Forward 6.

We kicked 1 more goal via Adrian Kalcovski to seal the game. 12 games in to his senior football career, he is a Premiership Player at only 19 years of age. An amazing achievement.

We rated Blackburn so highly, they have class on every line and I am so proud of our playing group who came to fight the fight.

Mitch Honeychurch – what a player. He has made finals his own – another 10+ tackles and incredibly combative.

Our midfield brigade of Johns, Schneider who would later be awarded the Blue Ribbon Medal for another outstanding game, Rob McComb and Honeychurch worked beautifully with Robbie Ross who plays with that much heart! I will say it again, I thought he should have been included in the SEN Premier Div Team Of The Year.

Greenwood, Luke McComb, Wadley and Ryan Mullett who was solid in his final game for the club were enormous on the Wing and across Half Forward.

Although we didn’t kick well at goal our Forward Line – Eddy (3 Goals, Pressure Acts and Competed All Day) Ainger (3 Goals, Halved Countless Balls) , Best (Tightly Checked by his opponent, however, won the battle and could have kicked 4-5 – great game), McConnon (2 Goals, Pressure Acts and Aerially Competed when required) & last but no least Cam Purdy…Purds does the job every single week whether up forward or in the Ruck. Played a defensive forward role, could have kicked 2 goals and applied a mountain of pressure. Would be the #1 forward in most teams across the competition.

To win by 6 goals I couldn’t be happier, we were really challenged and found a way. Blackburn played it right out to the final siren, credit has to go to China Breen / Brendan Allan and everyone at the Burners – Well done.

The closeness of our group is our strength and you can see the boys are loving playing footy with there mates. The Premiership solidifies these friendships for years to come and is a great reward for the effort that was put in season 2019.

Congratulations to our Development Team under Paul Breen who won their 3rd flag in a row in a terrific performance, there are plenty of players in this team who I would expect to be playing regular senior football next year.

This Senior Premiership is for everyone who loves the mighty eagles! It’s been a long time since we have gone Back To Back, but the hard work our group had put in saw them reap the rewards.

Let’s all enjoy it for a little while longer and then look to do it all again in 2020.

Thanks to all the volunteers, committee, coaches , supporters for all your help and support.

We are involved with one of the best local football club’s in the land and I certainly feel privileged to coach the Vermont Football Club.